Matt planned to propose in July for their four-year anniversary during a family trip to a century-old cottage in Michigan, one that Charlotte had visited every summer of her life. When Matt discovered the trip wasn’t until August, his carefully planned Michigan scavenger hunt was scrapped for one that was local.

One Saturday morning, Matt told Charlotte to “dress cute” and that he had a present to give her for the cottage trip. He then sent her off on the scavenger hunt, which eventually led her to their neighborhood library to find a clue in her favorite book, “Homeless Bird.”

“The clues were very sweet and got more romantic as it went along,” said Charlotte. “The clues led me back to our apartment where I found Matt on one knee. It was a total surprise. He would do this kind of thing for a present, so I wasn’t thinking he was going to propose. I knew it was a possibility, but I didn’t want to assume.”

“The clues were very sweet and got more romantic
as it went along [until] I found Matt on one knee.” 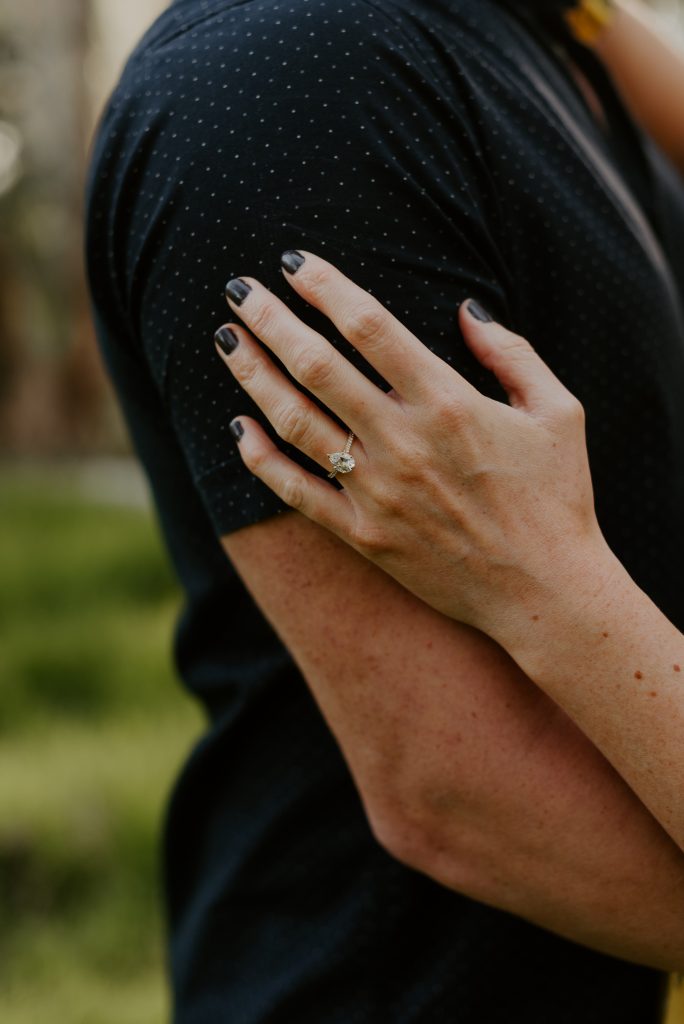 Charlotte’s engagement ring is feminine and elegant .The slender yellow gold graduated band is beset with prong-set diamonds.  This modern classic and majestic cathedral setting has a 2-carat pear shape moissanite center reminiscent of the golden age of Hollywood.

“I love the ring!” said Charlotte. “It’s modern and just beautiful. It was exactly what I would have picked out myself.”

The email is why Matt got it right. “Once I could tell we were heading down this path, I asked her to send me an email so I would know what she liked. Also, very importantly what she didn’t like. That was actually 1-1/2 years ago.”

In the email Charlotte told Matt she liked pear shapes and other things, but Matt wanted to add his own unique twist that Charlotte wouldn’t have planned for but would love. “I added my own little flourishes under the setting on the band.”

Another twist was Matt choosing a moissanite center stone. “I actually discovered moissanites about six months before. Charlotte loves the moissanite because it’s conflict-free, being that it is lab made. When it really comes down to it, no one knows it’s not a diamond.”

“Amy at Diamonds Forever helped me. She had me hold a 2 carat moissanite next to a 2 carat diamond. I could tell no real difference. It confirmed the moissanite decision. We are both huge fans of moissanite.”

“I was only looking that day, but once I had the perfect ring and the moissanite and the price was affordable, it made sense to get it that same day.” 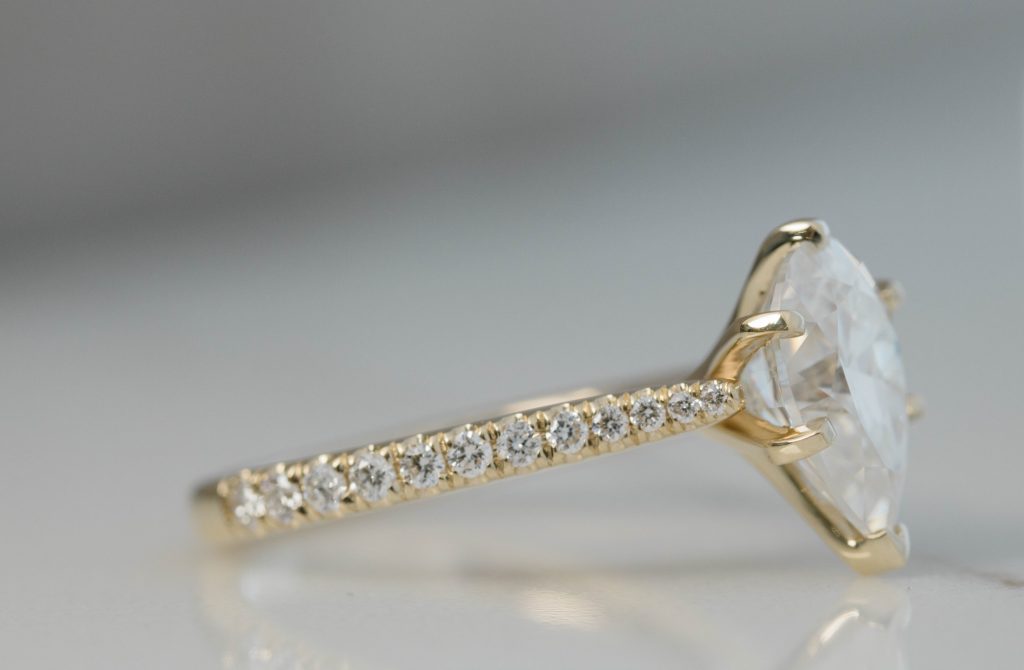 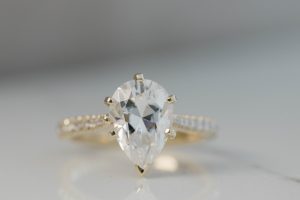 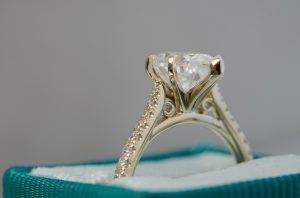 Charlotte and Matt’s wedding is in September. When asked how they each knew they had found their forever person, Charlotte said, “We were so happy and open with each other. If something bothered us, we would tell each other. My favorite thing about Matt is his sense of humor. He’s really funny.”

They met in college. “I think we were lucky, we were really great friends first,” said Matt. “So when we did start dating, within a year I knew this was it.”

Matt also knew after traveling through South America together. “Eighteen hour bus rides, 24-hours together for six months straight, and neither of us felt sick of each other. I knew we could make it through anything.”

When asked what he loves most about Charlotte, Matt joked that she laughs at all his jokes. On a more serious note he said, “She is just a good person. It would be hard to define someone who doesn’t like who Charlotte is. She doesn’t force her opinions on to other people. She is always there for others. She is always willing to help others.”

“She is just a good person. It would be hard to to find
someone who doesn’t like who Charlotte is.” 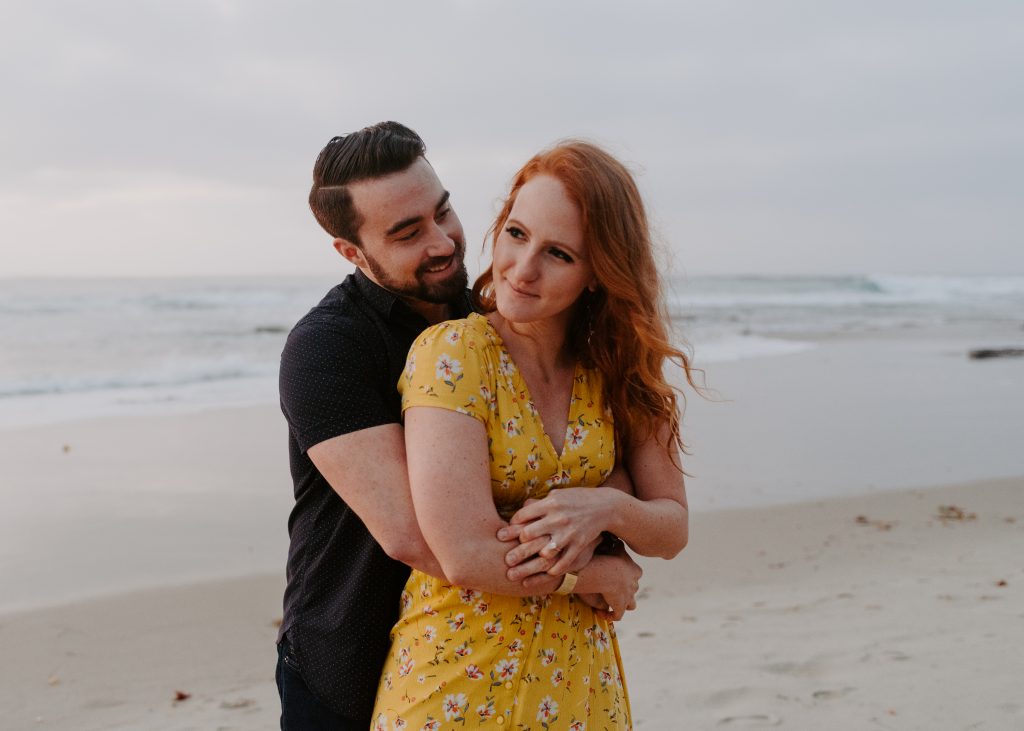 Charlotte’s tip for anyone planning to propose is to “just find out what she wants because this is a really big moment. Once you are talking about marriage, ask what she wants. Matt knew I didn’t want a big public proposal. I wanted to be the one to tell everyone. I didn’t want them to know before I knew.”

Matt’s tip is to be transparent. “That email really helped me to design the perfect ring with a blend of her and me.”

As far as the perfect proposal, Matt suggests just asking what her perfect and worst proposal would be. “What do you like? Family hiding in the bushes or no? Photographer, yes or no? Intimate with just us? It’s important to be specific.”

“That email really helped me to design
the perfect ring with a blend of her and me.”

❤️ Thank you so much to Charlotte and Matt for letting us be part of your love story. What a beautiful proposal! Amazing!